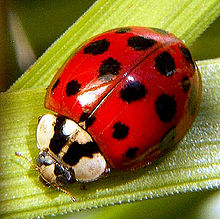 Harmonia axyridis is a large coccinellid beetle. Its colour ranges from yellow-orange to black, and the number of spots between 0 and 22. It is native to eastern Asia, but has been introduced to North America and Europe to control aphids and scale insects. It is now common, well known and spreading in those regions.

When the species first arrived in the UK, it was labelled “the many-named ladybird”, because among the names listed were: multivariate, southern, Japanese, and pumpkin ladybird.